What to expect from Ligament Surgery?

The knee joint may become unstable due to the damaged ligaments. Often can be caused due to sports injury. The torn ligament can affect the inability of knee movement while turning, twist or pivot the leg. The ligament tissue connects the femur to the shin bone.

Knee injuries caused by the stretched or torn ligament tissue can occur due to several activities including skiing, tennis, squash, football, and rugby.

The ACL is the most common type of knee ligament injury consisting of almost 40% of all sports injuries.

Knee Ligament Surgery is done to fix the torn or stretched ligament if other medications are not effective.

The ligaments are the elastic connective tissue bands that connect one bone to another, The knee joint is often stabilized by the two ligaments that cross in the middle of the knee, connecting the thigh bone to the shinbone.

The ligament tear or ACL injuries often occur in sports and fitness activities, which largely put pressure on the knee. Some of the most common causes are:

When these ligaments are damaged. The overall joints become unstable. Thereby, affecting the movement of the knee. Which limits the ability to pivot, turn and twist your leg. While a mild injury may stretch the ligament but may leave it undamaged.

Risk factors for ACL injuries can be:

As per the recent studies, the person might not feel the pain, instead, the person might hear the popping sound from its knees while such an injury occurs. You might experience knee-buckling often while trying to stand and swelling of the knees.
It would be better to consult with the doctors, as ligament injury resembles other conditions and medical problems as a symptom of the injury.

Types of ligaments in the knee :

The ligaments connect the thigh bone (femur) with the shin bone (tibia). There are 4 vital ligaments in the knee:

Post rapid injury the patient might feel discomfort in walking with a large amount of knee swelling across the joints and complete loss of motion.
The doctor may often suggest x-rays to look for the initial evaluation of the ACL injury. The magnetic resonance imaging (MRI) scan evaluates the ACL and also checks the possibility of the depth of the injuries often to the other areas namely meniscus cartilage, articular cartilage, or other knee ligaments.
In addition, the physician can often perform the Lachman’s test to examine the damaged ACL.

What is the procedure

During arthroscopic ligament reconstruction, the surgeon makes several small incisions-usually two or three-around the knee and sterile saline (salt) solution is continuously pumped into the knee through one incision to expand it and to wash blood from the area allowing the doctor to see the knee structures more clearly. Surgical drills are inserted through other small incisions which drills small holes into the upper and lower leg bones where these bones come close together at the knee joint. The holes form tunnels through which the graft will be anchored. The graft is then secured with hardware such as screws or staples and the incisions are closed with stitches or tape. 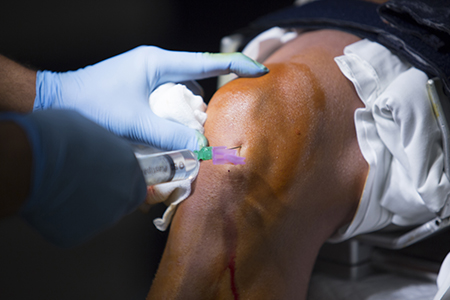 Amazing team of nurses,they looked after me so well. Will miss you all. Thank you for being superstar.

No suggestion hats off specially to all the nurses and staff. They are very heplful and friendly

First of all I thank all doctors, all sisters from all staff members was very helpful with excellent service, Thank for all Axis team God bless you. Excellent thank you very very much.